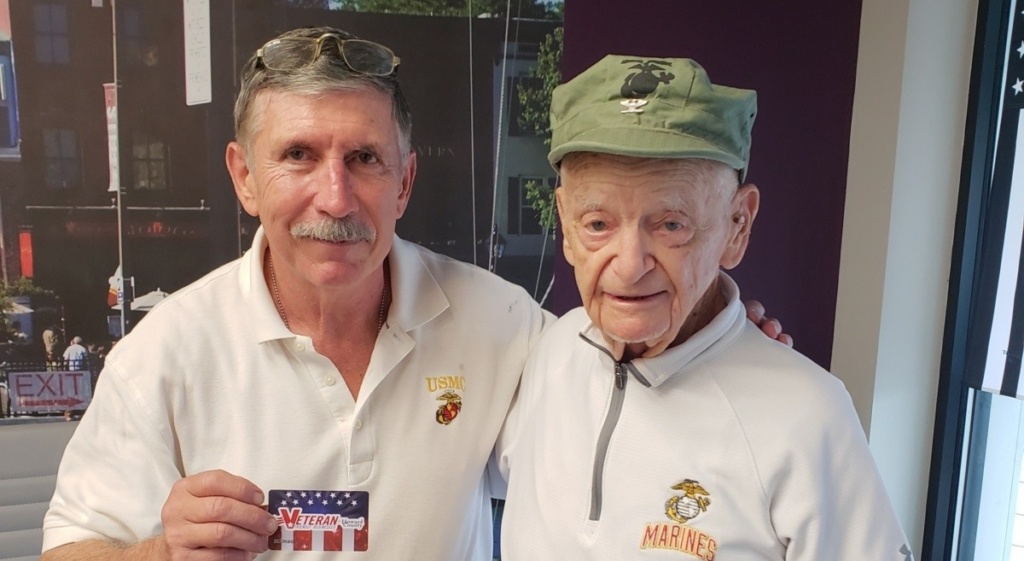 To a casual observer, Lieutenant Colonel Ed Hall and Colonel Lou Schott look like boyhood friends. They ride everywhere together in Hall’s jeep (the spare tire cover reads United States Marine Corps), their conversation is gruff yet playful, and their weekly calendar includes a slew of Veterans’ events that they attend together. But, as it happens, the pair met just a few years ago by near accident. Hall recalls the date perfectly:“December 7th, 2016.” They were at Mission BBQ, a veteran-friendly restaurant in Ellicott City, when Hall spotted Schott wearing the iconic red baseball cap worn by many marines. It was WWII Veterans Recognition Day, and Hall had come with more than 20 members of the Ellicott City American Legion. He invited Schott to join their table, and soon the two colonels were swapping stories.

As Hall would later learn, Colonel Schott was inspired to join the military by his older brother, Henry. Henry wanted to serve so badly that he enlisted in the army two years before he was eligible, at just 16 years old. Schott was four.“He ran away from home and joined the Army as a mule skinner, They were really mean animals,” he says, chuckling.

While Henry was posted at Governor’s Island, he worked alongside some marine recruiters that would change the course of the Colonel’s life. Henry eventually came home, and he told his little brother this: “If you ever go into the service, go into the Marine Corps. They’re the best.”

That sentiment stayed with Schott for years, and when the war came, he knew it was time.

Hall continued: “Schott was a platoon leader at the Battle of Peleliu . . . the toughest, bloodiest battle of WWII.” After an injury and a promotion, Schott took command of a rifle company in the 1st Battalion, 5th Marines. “A significant feat,” Hall adds. The day they met, Hall invited Schott to a vintage weapons shoot at Fort Meade. At the event, Schott spoke about his experiences in the Marines Corps with clarity and passion. “I thought I knew a lot about leadership, a lot about the Marine Corps,” admits Hall, “but walking around with this guy… I learn something every day.”

Schott’s service required courage, military expertise, and leadership. “You have to make the right decision, at the right time, for the right reasons,” says Schott. It was a demanding job. His men were calling him ‘pop’ at 23 years old. He missed three Christmases in a row during his service, and to this day, I’ll Be Home for Christmas is his favorite holiday song. But it was who he was. Once a Marine, always a Marine. So, when he came home from the war, got married and transferred to the Marine Corps Reserves, he felt like a fish out of water. He had five children. He took on work at a government agency. He lived a joyful life, but he missed being an active Marine. Decades later, after his wife’s passing, Schott was living out a traditional retirement, “reading books and doing crossword puzzles,” Schott says. But Hall got him interested in doing more. “I made a lot of new friends,” Schott explains,

“He really gave me a second life.”

These days, Colonel Schott is deeply involved in local Veterans’ affairs. He’s a member of the Executive Committee for the American Legion Post 156, the Howard County Veterans Day Parade Committee, and the Howard County High School Presentation Program. Wherever he goes, Colonel Schott seems to captivate people. When he visits museums, the docent is the one taking notes. When he speaks about his passion for firearms and the responsibility that comes with them, students listen. At restaurants, he often becomes an impromptu storyteller at the center of a rapidly growing audience. When he was recognized as the last man standing from his unit at the Battle of Okinawa, Maker’s Mark printed him a custom bottle label for the occasion. When he joined the Old Post Gun Club, they named an annual event after him: The Colonel Lou Schott 200 Yard Offhand Competition. But none of this is the result of coincidence or even fame. Colonel Schott is simply a proud American who wants to serve his community. And that resonates.

Recently, Colonel Schott increased his community involvement even further by becoming a committee member for the Veteran Friendly Businesses of Maryland Program, alongside Colonel Hall and U.S. Naval Academy graduate Bob Chew of The Bob & Ronna Real Estate Group. This program will help active and retired service members find local, Veteran-friendly businesses like Dandelion Bakery and Bistro. “There are many vendors in Howard County that love Veterans and want to show their support for Veterans. This program allows that to happen,” says Hall. “As the Howard County Joint Military Council Commander,” Hall adds with conviction, “it’s my duty to raise visibility and awareness for Veterans.” But his dedication to the program goes far beyond duty.

“I want everyone to know and recognize Veterans for what they are… true heroes.”

Howard County already does a lot to honor its Veterans, thanks to Hall and Schott’s efforts, but this program will amplify that message. That’s why the Colonels persevere in their efforts, even after accomplishing so much. “We continue to serve those that have served,” they say.

When Lieutenant Colonel Hall and Colonel Schott first became close friends, Hall would drive up to Schott’s house playing the Marines Hymn over his PA system. They would salute, Schott would hop in the car, they would shake hands and be on their way. It was a personal tradition. But then, one day, a neighbor raised an American flag. “We saw one, and then two and three and four American flags,” Hall grins. It had become something that belonged to the community. “When we go through the neighborhood now, they want to hear the music, they want to hear the Marines Hymn,” Hall says happily. People come out onto their porches and wave. They even yell for Hall to turn it up! In this way, what was once a small gesture of reverence has become a wave of support and a great source of joy. And, with the full support of the community behind it, the Veteran Friendly Businesses of Maryland Program will do the same.